The building industry is changing at a rapid pace. With the help of BIM (Building Information Modeling) there is potential to save 15-20% of the cost of a project.

Working with some form of 3D tool (eg Autodesk Revit) is today a basic prerequisite, the great profits in the building industry we today find in communication. The area of ​​communication includes the following high-potential areas for improvement:

The building industry has previously lagged slightly behind the mechanical industry in terms of digitalisation, as this industry has not been as affected by global competition. However, the British Government’s BIM initiative aimed at reducing the cost of state-funded building projects by 15-20% has driven development, and today the building industry is bypassing the mechanical industry. To achieve its goal of reduced costs, the initiators in England have modernized the BIM concept and divided it into levels. From 2016, you as a building company must meet “BIM Level 2” (below) to participate and work on a state-funded building project in England.

In Sweden, it is not as clearly defined what level of BIM is required, but in larger projects it is usually about Level 2. However, we know that many still work in Level 1. 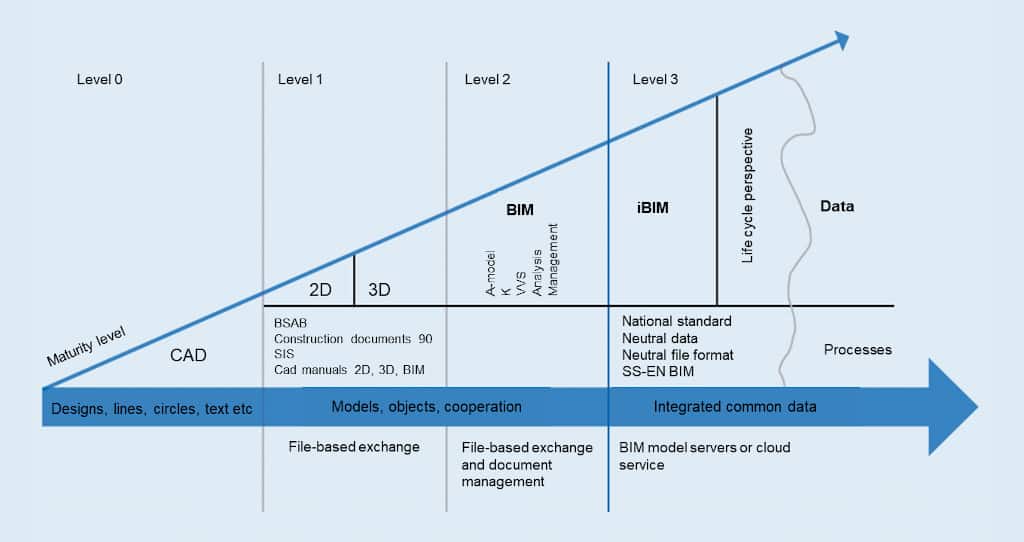 This level is about designs and unstructured CAD information in 2D. Printed documents are the basic carrier of information and are considered as original documents.

The work takes place in 2D or 3D with a certain level of information standard. Here, visual coordination also takes place in a common data environment. Within the administration, designs and documents are stored in file-based systems.

The work is model-oriented and properties are linked to the different objects. The design of the facility is presented in 3D.

A building is fully described in the models that are also used in the management and maintenance work. Here you can search for building-related information and management data for the property portfolio. Open standards are a requirement.

Being able to deliver digital data according to the BIM model is in many cases a requirement today, but the digital data also provides great opportunities to take the design and construction to the next level. The slightly more advanced designer can, for example, in Autodesk Dynamo work with powerful parameter-controlled design without programming knowledge. The parametric model can then be uploaded in a WEB interface where customers or sellers can manipulate the model, which generates updated models in, for example, Autodesk Revit and / or the calculation software Autodesk Robot Structure.

This is a typical example of a streamlining that both gives the customer increased freedom of choice, but also saves design and construction time.